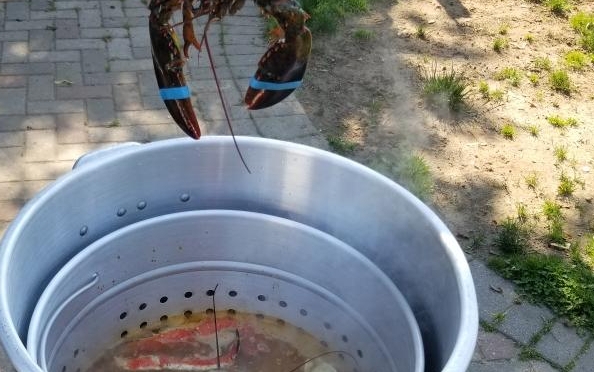 It’s an early Monday morning on Long Island and the coffee is perking on my stove. I did not sleep well last night. I overate and over drank on Sunday at our good friend Scott and Ally’s house. It was however, well worth it. We were celebrating our wedding anniversary at their house on Sunday, and Scott, always the gracious host, offered to do a lobster boil for us.

This was going to be the second lobster boil we have been to at Scott’s house in as many years. Therefore, I knew I was in for a treat. I still have pictures of the last lobster boil and it was quite memorable!

We were greeted immediately at the door with a glass of wine and were led outside to the cooking area. The first glass of wine was Gabriella Pinot Grigio delle Venezie from Italy, and one of my favorite bottles of wine. This was perfect to watch as Scott began to cook up a storm.

Scott had purchased a new pot and burner that fit onto a twenty-pound liquid propane cylinder, so the cooking was going to be done OUTSIDE. This was no ordinary size pot either. I stepped outside and I was drawn to this thing like a moth to a flame with a glass of wine in my hand. The pot was an industrial size one along with the burner that fit under it. The pot could hold enough food to feed an entire platoon of hungry Marines. Whenever I cooked way too much, my mother always asked me “are you cooking for an army?” Clearly, Scott thought we would arrive hungry and I was hungry now for sure!

By the time we had arrived at Scott’s house, he had the water at a rolling boil on his porch in his backyard. He had even added various amounts seasoning to the water. The first was some old bay seasoning. Old Bay Seasoning was originally created in Baltimore, MD by a man named Gustav Brum, and then sold to McCormick & Company in 1990 after Brum passed away in 1985. It contains seasonings such as celery salt, black pepper, crushed red pepper flakes, paprika, cardamom, etc. Old Bay is a standard ingredient here in the North East for seafood (said as if I am from the state of Maine). Next, he added a sliced lemon, whole garlic cloves, a bay leaf or two, and he might have even put in an onion. When I opened the lid, it smelt heavenly. Yet, it only gets better. Potatoes and cheddar Bratwurst were next! The bratwurst TOTALLY added a lovely flavor to every cooked in the pot with them!

The small new potatoes and brats simmered for only a few minutes and he started putting the live lobsters in. By the looks of them, they were about 2 to 2½ pounds each. The shellfish included two dozen little neck clams. These are small and tender clams perfect for a fast cooked meal. He also had a bag of mussels that were cleaned and de-bearded by the local fish market. I do like mussels. However, we soon discovered not all the mussels were alive; about half of them were open. If a mussel is not closed up tight before you cook it, then it should be thrown away since it might be bad and could make you sick. We all cried a little for those mussels, but there were plenty left and more food to go into the pot. The last bit of seafood was the extra large shrimp. It was already peeled and deveined, so there was not any work involved in eating them after they were cooked. Last but not least, was six ears of corn that were shucked and cut in half.

The whole thing boiled for only a few minutes. It was probably less than five minutes later when Scott said it was already done. I was in disbelief that the corn did not need a few minutes more, but I was soon proven wrong. I helped lift out the HUGE strainer basket that was inside the industrial cast aluminum pot. Along with it came the perfectly cooked seafood as it emerged and the hot water drained back into the pot. Scott began by separating out the lobsters first into a bowl, and then even dividing up the rest of the seafood into three more bowls. On the table were empty bowls for the shells and a freshly opened bottle of wine. Scott paired this delightful seafood meal with a St. Francis Chardonnay from Sonoma County. Have I mentioned how much I love these St. Francis wines? If not, I am saying now that I do love them. The wine went perfectly with all the drawn butter and hot seafood.

I myself started with the clams, mussels, and shrimp. Then, I moved on to tackling the lobster. I began by helping Jennifer with hers and giving her the claw meat once I had extracted it using a nutcracker. We both wound up splitting one of the huge beasties between the two of us. Then, did I mention the king crab legs? NO! I forgot as they went into the pot FIRST with the potatoes. They were frozen, so Scott wanted to start with them in the water first and made sure it all came back up to a rolling boil before adding the lobster. OMG, they were so good. I like them even better than the LOBSTER!

We all ate and drank and then ate more until there was only one lonely lobster left, a few small pieces of king crab leg, a few mussels, and a few clams. We all helped clean up. I worked on the lobster and king crab legs, putting the meat in a Ziplock bag for a cold crab meat/lobster salad they could enjoy the next day.

Once dinner was all cleaned up, I sat down and enjoyed one more glass of chardonnay before Alison announced it was time for desert. They had picked up my favorite cakes for desert as it was Jennifer and I’s wedding anniversary. Twenty something years we were celebrating. That’s about how long I have been writing down recipes in a word document that you will all be reading over the next year. The cake was delicious and I was stuffed beyond belief. We retired to the couch and I enjoyed their company while their fun and energetic German Shepard puppies kept us entertained. I love those dogges (as Jennifer calls them)!

Thank you guys for such a wonderful and fun filled anniversary celebration!!

© Russ Ahrens and The Magic of a Perfect Pairing,2021

3 thoughts on “The Lobster Boil”