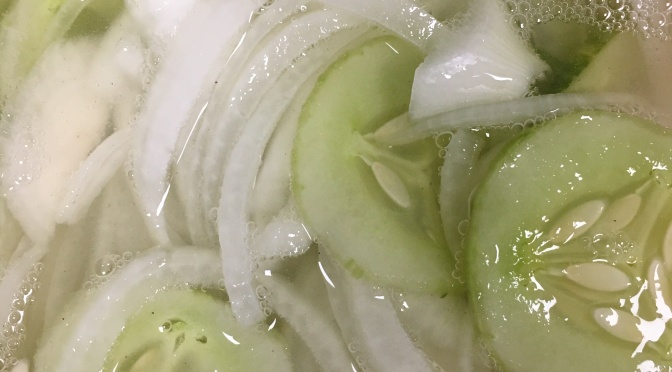 This is one of those old timey’ recipes that I remember from my childhood. My mother used to make this once a year in the summer. I grew up in a suburb of New York where we were very close to Queens. The plots of land were small 45 by 75 feet. We had very little room in our back yard for a garden but we did grow fresh string beans and tomatoes every year. A small backyard was nice as a teenager because there was not a lot of grass to mow. One of the first things my brother did when we all got older was hire a lawn service. Thank you for that!

Since we didn’t grow are own cucumbers in our tiny backyard I suspect my mother purchased them at the local farm stand. Back then there were still a few small family owned farms on Long Island that existed close to the city. There you could get the BEST corn on the cob and fresh cucumbers. They are all gone now and if you want that kind of fresh produce you have to travel much farther east on Long Island then I am. It really is a shame. Mega-store produce is just not as tasty as the farm fresh stuff.

So that brings me to todays recipe. A coworkers of mine does have garden and he grows his own cucumbers. Wednesday he brought with him four cucumber to share. I asked if he minded if I made cucumber salad with two of them for our entire office. He sounded enthusiastic at the idea. So I brought in some ingredients from home to make cucumber salad.

At home I poured all the liquid ingredients into a plastic Tupperware bowl. Then I added all the spices list above and brought that with me to work. I left out the dill because I was out of it. I will pick up more today at the market by my office. Once at work I began by peeling the cucumbers. Turns out, I had a crappy peeler in my knife bag and it took forever. I need to replace that. Then using a chefs knife and plastic cutting board I sliced the cucumber into pretty thin circles. I may bring in my mandolin next time to make the slicing easier. Then I peeled and sliced an onion into half moon shapes. I added both of these items to my brine like substance I made at home. I put on the lid and stuck it in the refrigerator to marinate over night.

I will be serving it today with lunch and let you all know how it turns out. The next batch I will make any corrections I need to my ingredient list and add the dill. There are two more cucumbers after all.

That’s all for today. I will see you all on Monday unless the urge strikes me to Barbeque this weekend and post it live in INSTAGRAM. Hmmm Maybe my famous drunken chicken? We will have to see.

Until then be well. Be happy, enjoy life and if you cant be good be careful!